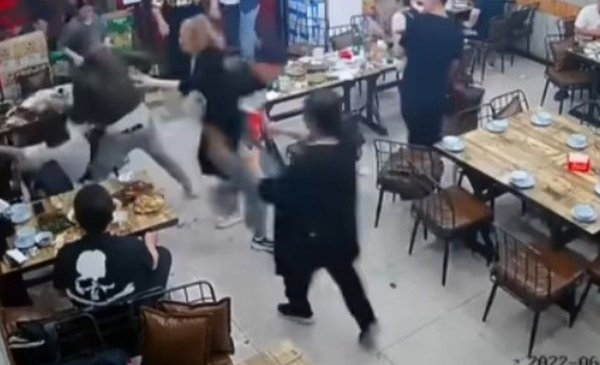 Nine people have been arrested in China after a video of a brutal attack by a group of men on women in the city of Tangshan went viral, police said.

The violent attack sparked outrage on social media and reignited the debate on gender-based violence in China.

The incident began when a man placed his hand on a woman’s back in a restaurant and she pushed him away.

The images show how the man hits her before others drag her out of the premises and continue attacking her as she lies on the ground.

The group of men is also seen attacking the companions of the woman who was having dinner with her.

This case of brutal sexist violence is shaking China: a woman passes by some thugs who wanted to flirt with her and they beat her up that almost killed her without the people around doing much to avoid it (once again).pic.twitter.com/uXQYMllqy4

Two of the women were admitted to the hospital and were in “stable condition and not in danger of death,” while two others suffered minor injuries, authorities said.

Police in Tangshan, in the northern province of Hebei, reported that they had arrested nine people on suspicion of violent assault and “causing trouble”.

“It could happen to me”

The attack dominated discussion on Chinese social media on Saturday, taking the top six spots for the most discussed topics on Weibo.

State television called for the suspects to be severely punished.

“This could all happen to me, it could happen to any of us,” read one comment on a post that received more than 100,000 likes.

“How come this kind of thing is still happening in 2022?” someone else wrote. “Please give him criminal sentences and don’t let any of them get away with it.”

A widely shared WeChat post took issue with the initial official framing of the attack as a simple act of violence.

“This happened in a society where violence against women is rampant“said the anonymous post.

“Ignoring and suppressing the gender perspective is denying the violence that people, as women, suffer.”

China’s fight against violence against women

Acts of violence against women are alarmingly common in China.

Ten years ago, while living in the country, I witnessed men assaulting their partners in broad daylight on multiple occasions. It was common to see groups of passersby just watching.

Historically, many have viewed such incidents as a private matter between a couple. Some have feared getting involved, either for their own personal safety or because they fear being implicated in a crime.

China only made domestic violence punishable by law in March 2016. Before 2001, physical abuse wasn’t even grounds for divorce.

Although sexual violence has become more likely to be prosecuted, the mood on Sina Weibo (a Twitter-like network in China) is gloomy.

Many believe that the result of this case will be a light sentence and a small fine.

Few cases have been ruled in favor of the victim unless they have images to back them up, and continued lockdowns in China over the past two years have exacerbated domestic attacks.