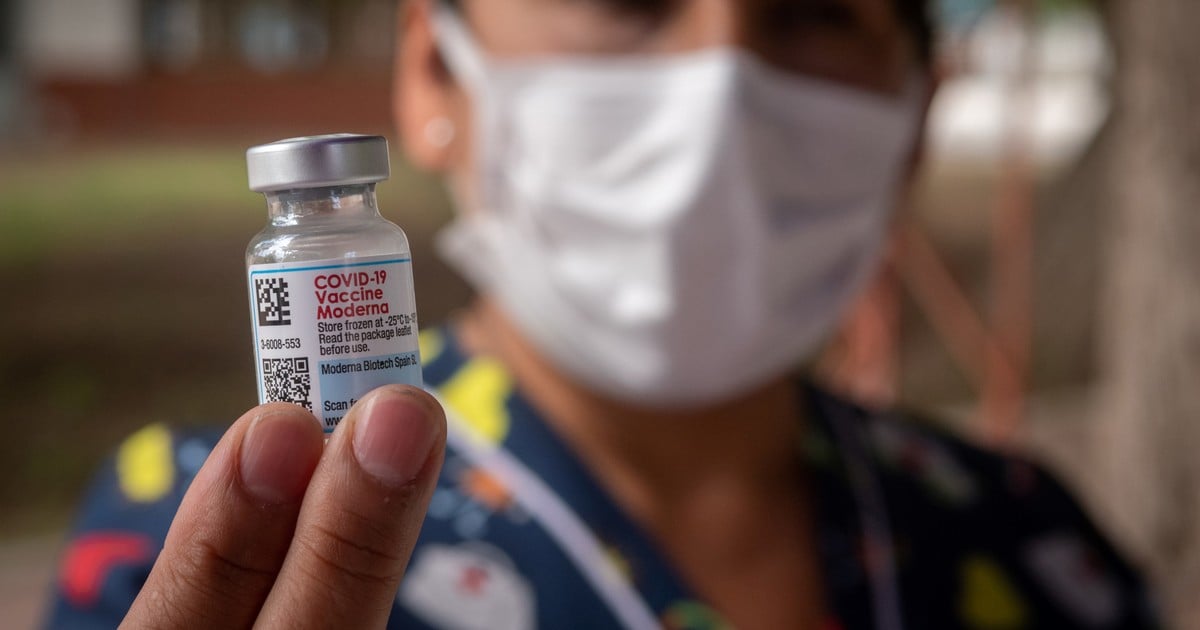 This Wednesday, the American laboratory Moderna announced positive results of its adapted vaccine for Covid variants. And although it has not yet been approved, it anticipates the next stage: that of bivalent vaccines.

Authorization by the US health agency is discounted. In fact, the FDA is meeting later this month to discuss the composition of these adapted vaccinesan analysis that the European EMA is also doing to define whether the vaccine strain needs to be changed for next fall in the northern hemisphere.

As reported by Moderna in a statement, a booster dose produced “a higher antibody response against Omicron one month after inoculation, compared to the original vaccine.” And it detailed that against Omicron, antibodies multiplied by eight.

“We are in the world of booster doses.” The one who defines the current moment is Rolando Pajon, one of the researchers who participated in the development of the Moderna vaccine and current medical director of the laboratory for Latin America. Visiting Argentina, the 50-year-old Cuban scientist spoke with Clarion hours before the company’s announcement and outlined the scenario to come: what can happen with the variants, how often should we be vaccinated and when will the vaccines for babies arrive.

Rolando Pajon, one of the scientists who led the development of the Moderna vaccine.

In this “world of reinforcement”, Pajón highlights the effectiveness of the Moderna vaccine. He does not want to compare with other brands, but to leverage himself on the results of his vaccine trials in the heterologous vaccination strategy like the one being used in Argentina.

He cites research carried out in Singapore and the United Kingdom in which it was shown that “it generates neutralizing antibodies that last longer.” “In this context of Omicron, the booster of our vaccine is capable of bringing neutralizing antibody titers 80 times higher than what one has at the time of receiving the dose,” he remarks. And although at six months there is a six-fold drop in antibodies, “they are still high.”

Here comes the strategy in which other laboratories, such as Pfizer, have also advanced: that of the bivalent vaccine or adapted to variants. More precisely, to Omicron.

Moderna’s bivalent vaccine has half of its components from the original sequence or strain from Wuhan and half omicron. Why, if Wuhan no longer circulates and Omicron is the dominant one, is it not 100% of the African variant?

According to Pajón, there are two reasons for maintaining the Wuhan strain. “From the point of view immunological With that sequence, it is the most expeditious way to generate high-affinity antibodies, so that the organism reacts quickly, and the circulating variant is added. and there is a pragmatic element: Regulatory entities are going to require that the new vaccine does not induce an immune response inferior to the existing one. And since the existing one was generated against the original strain, the bivalent strategy combines the two principles”.

In this “booster world” everything -as always with the Covid- will be marked by variants. Current and potential. He explains that we must look at the pandemic at a global and local level, and admits that there may be regions or countries where there are hardly any cases and in others pandemic-like outbreaks. They are the variation elements of viruses. But there is something that marks as significant.

“Until the arrival of Omicron, one variant always replaced another. Omicron came along and completely replaced Delta. But Omicron has not been replaced by anyone. It has generated sub-variants, but there is an opportunity to transition to something more predictable, more consistent. There is always the possibility that a new and unpredictable variant will change the equation again, but we are on the right track“, analyze.

Bivalent vaccines, he says, open the door to eventually adding these new strains to the vaccine in a less laborious way. It could thus, in the future, exist a trivalent vaccine that combines Wuhan, Omicron and a potential dominant variant that did not exist until today.

How will the vaccination schedules continue then? How often are we going to have to reinforce ourselves? The expert says that this depends on the immunization strategies of each country, but that the laboratory is working on “a panrespiratory vaccine, that you get a dose a year and you are protected against the variants of Covid and influenza ”. Moderna is already in phase III of an influenza vaccine trial and another respiratory syncytial virus trial in older adults. When will it be available? Pajon estimates that it will not be next year, but for 2024/2025.

Vaccination in babies and infants

The expert also addresses a controversial topic: Myocarditis and pericarditis as a possible adverse effect of messenger RNA vaccines in young adults. He assures that the risk of these cardiac complications in the group of 18 to 25 years that receives booster doses is “practically non-existent” and that in the cases that had reports “the vast majority was quickly resolved and the small percentage that required hospitalization did not have serious consequences.”

And it takes this point to emphasize that these isolated and potential adverse effects only refer to that age group and not to minors, for whom it is shortly expected an expansion of pediatric vaccination to infants and preschool children.

“On June 15 it will be discussed by an FDA committee the vaccine from six months to five years. Our vaccine is a quarter of the dose given to adults and is capable of generating the same response as young adults, who are the best responders. A clear sign of efficiency”, says Pajón.

In a world with more benevolent variants, adult population mostly vaccinated and with a very low risk of complications in the youngest, Does it make sense to vaccinate babies and infants?

A boy receives the vaccine this summer on the beach in Mar del Plata. In the US they are now considering vaccinating babies and infants as well. Photo Marcelo Carroll / Archive

“I speak as a vaccinologist and also as a father. The risk of severe disease in these groups is low, but not zero. And since it’s not zero, I ask myself which side of the statistics I want to be on. Also, we are just discovering and studying long-term Covid. And we have seen that the long Covid can give to anyoneregardless of mild or severe disease. I would like to offer my boys the best opportunity to have their immune system prepared, ”she remarks.

And it closes with another concept of why vaccines are important: “Herd immunity cannot be obtained against Covid due to its worldwide dissemination and its persistence in the population.