The green bet of Nicolás Sutil 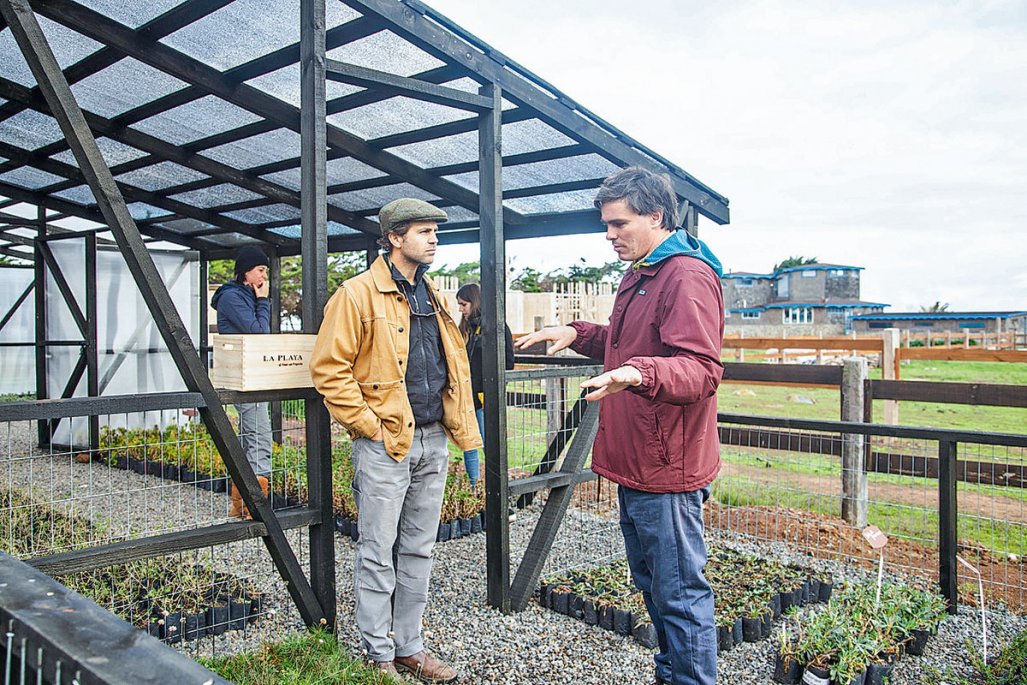 Nicolás Sutil (34) will never forget that first directory. It was the year 2019, he had just resigned from the Patagonia company, and was installed as president of Top Wine Group, parent company of the family wine company. From that position, that day, he promoted his purpose: change the old-fashioned label on the bottle -which showed the hotel they have in the Colchagua Valley next to the vineyards- and associate it with a new concept related to La Playa. “I did not understand why the wine had that name and was not related to the coast,” says the commercial engineer, one of the four sons of the president of the CPC.

He discussed with the board the idea of ​​a change of image, the value proposition to customers and donating 1% of sales -which in maximum capacity is equivalent to 10% of profits- to the repair of the Chilean coastline through 1% for the Planet, an initiative created by the founder of Patagonia, Yvon Chouinard, and which brings together more than 3,000 companies in the world (including Patagonia, OXO, Klean Kanteen and BNP Paribas).

The first would be the Punta de Lobos Foundation. The idea caught on and Sutil went to Denmark, England, Holland, Belgium, the United States and Brazil to position the new brand concept. It was a complete success, he says. and sales for the year were even exceeded by 119% and La Playa -one of the three vineyards of the Top Wines Group- went from representing 40% of the group to 50%.

In 2021 they made their first donation, US$ 8 thousand that is being converted into native reforestation of 16 species of Punta de Lobos. They have already reproduced 4,000 plants, and at least 3,000 were possible thanks to the resources provided by the vineyard.

Now, they are going for the second one, says Sutil, who is beginning to put his stamp on the family business.

Sutil studied business engineering at the Universidad de los Andes and it was his love for surfing that fueled his awareness of caring for the environment and the importance of preservation. At the university, he collaborated in the start-up of the institution’s surfing branch and created the Give Surf foundation, which seeks to empower local leaders to create schools for this sport. After the 2010 earthquake, he obtained used boards with a group of Californians and toured the coastal areas affected by the catastrophe to encourage the sport. Ten years after its foundation, it continues to operate and one of its emblematic cases is in San José de Mariquina, in the Los Ríos Region.

After that, he emigrated to Alaska for three months, where he dedicated himself to fishing and surfing, and came back with the idea of ​​working on a brand with a purpose. It was there, in 2011, when Mekis told him that there was a vacancy at Patagonia Chile, the outdoor clothing brand. He worked for eight years and became general manager of the firm. At that time, Mekis was a brand ambassador and they continued to work together.

During his time at the US-based company, he had to study NGOs and decide which ones to donate 1% of sales to. “That marked me, and I thought, ‘if one day I stop working here and go to the family business, I have to do something like this'”says Subtle.

In 2019 he resigned from Patagonia and joined the vineyard founded by his father full time.Juan Sutil Servoin, current president of the CPC.

Since then, he has been pushing to innovate in ecological projects. “In 2021 we went from 80 thousand boxes to 94 thousand that we project this year, that is, a growth of 18% that will help us achieve at least US$ 2.5 million in 2022. Therefore, we plan to donate US$25,000 a year to environmental projects,” says the chairman of the winery’s board of directors.

In addition to this, Sutil says that it is not only something that can be seen as greenwashing; They are also working on making the minimum environmental impact with the vineyard, they have the Wines for Chile sustainability code, this year they will eliminate 100% of the herbicides in the Colchagua field and began with the biological corridors between the vineswhich consists of letting natural grass grow to allow biodiversity to live within the vineyard. In addition, since 2020 they are measuring water and carbon footprints and are vegan certified.

Patricio Mekis (34) is an engineer in tourism, however he had steps in commercial engineering. In one of the classes of the race he had to analyze a brand and he chose Patagonia. At the same time, together with his brother Federico, he founded Bowl Park (skate) and Wave Park (surf) to promote these sports in the country. Mekis is also a big wave surfer with Ramón Navarro -a native of Pichilemu- and with him, They have been promoters of saving the area of ​​Punta de Lobos from large real estate developments.

In 2013, two projects were approved in the area that sought to settle on the cliffs of Punta de Lobos. This news hit the local community, and Ramón Navarro asked Patagonia for help to intervene. Thus, at the beginning of 2014, together with the support of the Save the Waves Coalition, the Punta de Lobos Defense Committee was formed. And they managed to modify the regulatory plan restricting the uses to the land of the place, defining them as green areas.

However, the change of direction occurred in 2017, when Mekis, at that time in charge of sustainability, and the team from the Punta de Lobos foundation managed to raise funds to buy one of the most desirable areas in the sector, the Mirador Punta de Lobos. This guarantees its protection and free access forever. This action – backed only by private parties – generated the acquisition of 2.2 hectares and was promoted, among others, by former EuroAmerica president Nicholas Davis, surfer Ramón Navarro, Patagonia and the Florida-based NGO Save the Waves.

Today, this land has been converted into a park that receives 550,000 people a year (Torres del Paine received around 290,000 in 2018) and thanks to the contribution of private individuals and La PLaya Wines, they are working on a process of restoring soil, reforestation of native plants and enhancement of the area. They are currently looking for this model to be sustainable and to be applied in other coastal areas.

By 2023, the vineyard intends to triple donations and look for projects that have an environmental impact in other countries and regions. As for the foundation, during the second semester they launch their membership system and in 2023 “our goal is to be able to carry out the first cactus repopulation exercises,” says Mekis.