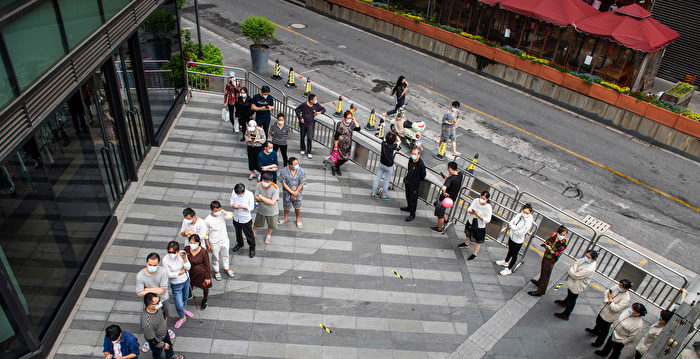 [The Epoch Times, May 30, 2022](Reported by Zhang Wan, reporter from The Epoch Times Special Department) The Chinese Medical Insurance Bureau recently issued a notice that clearly stipulates that the cost of large-scale nucleic acid testing should be borne by the local government. For the Chinese government, which is deeply indebted, there is a lot of pressure to pay the fee.

In the announcement on May 26 this year, the CCP Medical Insurance Bureau stated that, except for the nucleic acid testing expenses incurred by insured patients when they seek medical treatment, which can be paid by the medical insurance fund, local governments are responsible for the normalized nucleic acid testing fees in various places.

Since the outbreak of the CCP virus (COVID-19), the CCP authorities have been adhering to the “zero” epidemic prevention policy, and nucleic acid testing has been normalized in many places.

In Tianjin, Wuhan, Dalian and other cities, if residents do not follow the prescribed frequency for testing, their health code will become a “gray code”. Holders of gray codes will be prohibited from taking buses, subways, and taxis, and will not be able to enter and exit residential areas, office buildings, shopping malls, restaurants, etc. In fact, not carrying out nucleic acid testing on time almost means that it is impossible to move an inch.

In Beijing, citizens are required to develop the habit of repeating nucleic acid tests; taking a train, seeing a doctor in a hospital, or participating in a multi-person event must hold a 48-hour negative nucleic acid test certificate.

In the early days, nucleic acid testing in China was expensive. According to the website of the Zhongkai High-tech Zone Management Committee in Huizhou, Guangdong Province, at the beginning of last year, the single-person nucleic acid testing fee in public hospitals in China’s provinces dropped from 120 yuan (18 US dollars) to 80 yuan (12 US dollars); the single-person testing fee in Shanghai was at the end of last year. It dropped to 40 yuan ($6), and further down to 25 yuan ($3.7) by early May this year.

The Chinese Medical Insurance Bureau issued a notice on May 22 this year, requiring provinces and cities to reduce the cost of single-person testing to less than 16 yuan ($2.4) from June 10 this year; the cost of mixed testing for 10 people will be reduced to 5 yuan (0.75 yuan) per person. USD) below.

If the 2020 census data of the Communist Party of China is used, each person is tested every three days, and the latest testing fee stipulated by the authorities is used, the testing fee for China’s urban population (about 900 million people) will be between 540 billion yuan and 17,000 yuan. billion ($80.7 billion to $254.1 billion).

According to the “Statistical Bulletin on the Development of Medical Insurance” released by the National Medical Insurance Bureau in March this year, in 2021, the number of people insured in China’s basic medical insurance will reach 1.364 billion, and the year-end balance of basic medical insurance (including maternity insurance) will be 3.6 trillion yuan ($538 billion). ), even if it is all used to pay for normalized nucleic acid testing, it will be overdrafted within 2 to 4 years.

But for China’s local government, which is deeply indebted, there is a lot of pressure to pay the fee.