The owner of a terrifying video in which he waved his daughter .. This is what he is doing in Ukraine

Home » World » The owner of a terrifying video in which he waved his daughter .. This is what he is doing in Ukraine 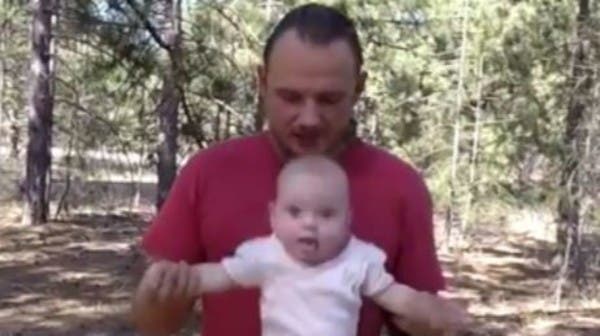 The appearance of a famous “Youtuber” in Ukraine has sparked controversy over the past few days, especially after he was appointed deputy head of the administration of the city of Kherson in the south of the country, by Russian forces.

Kirill Strimosov sparked outrage in 2017 when a clip went viral on YouTube of him waving and swinging his infant daughter by her legs in the air.

The terrifying video at the time showed the father waving his four-month-old daughter Milada from her legs and arms. Standing in a wooded area, he said he could hear her “bones exploding,” adding, “She feels comfortable.” He was then seen swirling her around his head, ignoring her fear.

While he justified his actions at the time, noting that “the blood flows faster in this way, so the girl feels comfortable,” adding, “Look, she is smiling,” referring to his followers.

He also claimed at the time that he was trying to show that his daughter was “attuned to nature” by flaunting “gymnastics from antiquity”.

However, the biggest surprise came yesterday, Thursday, after he appeared after his appointment as deputy governor of Kherson, during a press conference calling for the cancellation of plans to hold any referendum on whether Kherson should secede from Ukraine.

He also stressed that instead, the Kherson leadership should directly ask President Vladimir Putin to intervene, according to what the British newspaper “The Sun” reported. He said that “the city of Kherson is Russian, and there will be no Kherson People’s Republic on its territory, and there will be no referendums.”

Rather, he considered that the best solution is to issue “a single decree based on the appeal of the Kherson leadership to the President of the Russian Federation,” according to what was reported by the Russian RIA Novosti Agency.

Announcing the financial reward for its delivery

Strimosov is accused by Ukrainian authorities of being a “collaborator” with the Russians, and is currently wanted by prosecutors for treason, and wanted posters showed him offering a reward of £13,500.