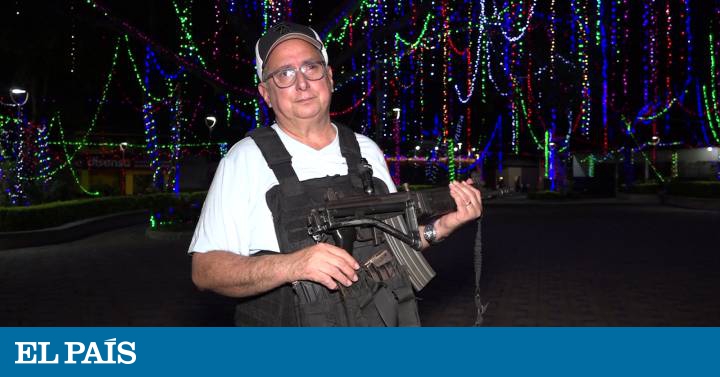 Rifle in hand, three loaders and bulletproof vest. Mauricio Vilanova, mayor of the Salvadoran town of San José Guayabal (14,000 inhabitants), after 20 years in power, has become the most charismatic “anti-gang” mayor of El Salvador. Due to the wave of insecurity between 2012-2015, caused by the increase in violence and the subsequent truce between government and gangs that bled the country, Vilanova developed a unique security model that has managed to reduce the killings of an average of 14 annual to zero in recent years. His secret, he says, is to patrol the armed streets with the authorities and work side by side with the citizens of the town, especially with the youth. Vilanova is like one more. “This is not the model of a mayor, it is the model of a town,” says the mayor while greeting each neighbor with whom he crosses. With this, he proudly explains, he has achieved an oasis of peace and crime-free organized in a country with nine daily murders.

Guayabal’s image is far from the surrounding colonies. Only 15 minutes away is the municipality of San Martín, where the shooting, extortion and violence by the Barrio 18 gang are the daily bread. This is corroborated by a soldier covered up to the eyes and clinging to his M-16 rifle. “Here nobody can guarantee security,” he says. But Guayabal is different. In the main town square the predominant atmosphere is familiar, with children playing with their bicycles or on the basketball court, well into the night. Ashley Patisserie doesn’t suffer frequent gang extortion, normal in every Salvadoran neighborhood. There is no sign of “seeing hear and shut up”, which looks on many facades of the country. Here nothing reminds gangs or the violence and fear that they subject citizens. Dozens of families gather to spend the weekend and quench their appetite with pupusas bathed in loroco cheese, typical of the country.

Vilanova, 61, walks calmly but stumbling around the square. Each neighbor stops him, smiles or greets. His head has a price since March, when, he explains, the Mara Salvatrucha planned to attack him with grenades. “One is always alert, but I am only afraid of the one up there,” he says, pointing to the sky as he sits next to a neighbor. She is Juana Rivera, who spends the night watching her grandchildren run around. At 94, he only remembers violence and fear. A civil war of 12 years (1980-1992) that left a balance of 75,000 dead and thousands missing and the evolution of organized crime and gangs have not given truce to this old woman, who smiles when Mayor Vilanova asks.

– Isn’t it true that we don’t have bugs here? [pandilleros en la jerga] What bother us?

-Name notice that there is no cipote here [niño] bad or that has been bothering for a long time, we are very happy with its management

Marcelino Guanado, 60, walks with his five children and his wife. He lives in San Salvador, the capital, but as soon as he can escape to stroll through Guayabal. “Here we are all cheros [amigos]. Where I live there would be gang members pending what I declare, but here I feel safe with my family, ”he says.

Vilanova, a member of the conservative Nationalist Republican Alliance (ARENA) party, has achieved something unusual in a country with a rate of 62 homicides per 100,000 inhabitants, according to the latest World Study on Homicide in 2019. “Guayabal is the only municipality in the country free from extortion and gangs, ”says Ricardo Sosa, a security expert from El Salvador and who has studied the management of the mayor for years and on the ground.

The beginning of this unusual model was started by the mayor in 2006, when he changed the police chief and began patrolling with the town authorities with his motorcycle. Vilanova does not recommend any mayor to assume the role he had to take 14 years ago. But, he argues, he had no choice. “The continuous threats forced me to arm myself, but they did not frighten me,” the rifle mayor ditch in hand.

Over the years, the model was taking shape and homicides going down. And it is that the mayor has achieved a unique prevention management, where citizens are also involved in the safety of the people. “Every guava girl has my cell phone to keep me aware of any problems,” explains the president while showing his WhatsApp.

The 40 square kilometers of Guayabal have a security that is organized in a similar way to modus operandi of the gangs. With 14 agents, three municipal employees, poles and neighbors who warn of possible strangers entering the place, and of course, Vilanova. The analyst Sosa says that although the focus has always been on the president and his weapons, the most important thing has been his administration, always focused on the quality of life in the town. “The armed mayor was somewhat mediatic, a very bold strategy of the mayor. But the important thing has been its resource management. ”

The town is with Vilanova. The mayor has won the support of his citizens for two decades. He has won seven consecutive elections and, in the last, won 78% of the valid vote, the highest percentage in El Salvador. Others have joined the success in safety, such as 97% potable water coverage, 98% electricity, a free school bus that transfers 500 students daily and the construction of parks and soccer and basketball courts through the Thousands of young people spend daily.

Although they are ideologically at different extremes, Vilanova admits the achievements of the new president, Nayib Bukele, who took possession on June 1. The new president met a country devastated by violence and in just 20 days launched a territorial control plan shielding several areas of the country with 7,000 members of the Police and the Army in 22 locations to cut the different sources of financing for The gang. “Your security management is working, although I still generate doubts because there are places where it does not arrive,” he laments. The mayor, he says, is confused that after so many years of success in Guayabal, no government has bothered to try to copy its security management. “Our model is replicable in every city in the world,” he argues.

With this new plan created by Bukele, El Salvador has reached the lowest homicide rate in the last 20 years. The data is undeniable. The analyst Sosa has no doubts: “There is a downward trend attributed to the will of President Bukele to take charge of security and recover the territory,” he says. Although the expert assures important to publicize the management of Vilanova nationwide to imitate the model and serve as an example in the different municipalities of the country.

Vilanova, which carries an automatic assault rifle and a Beretta semi-automatic pistol, repeats again and again that Guayabal’s most powerful weapon is the good relationship with young people, prey to gangs across the country. “Our motto is not the one that predominates on the walls of many municipalities to see hear and shut up. Here is to see, hear and denounce ”, ditch the mayor. In El Salvador, it is common for gangs to recruit minors, some even under threat of death, for surveillance in their control areas, extortion charges and hired assassinations. In 2019, almost 1,900 teenagers were arrested, most of whom were identified as gang members, according to official data.

Night falls in the town and the rockets, usual at party times in El Salvador, are the soundtrack. Tomorrow there will be nine killed in the country. None in Guayabal.