Home » Business » Tools to share outside of work, for entrepreneurs, at La Passerelle 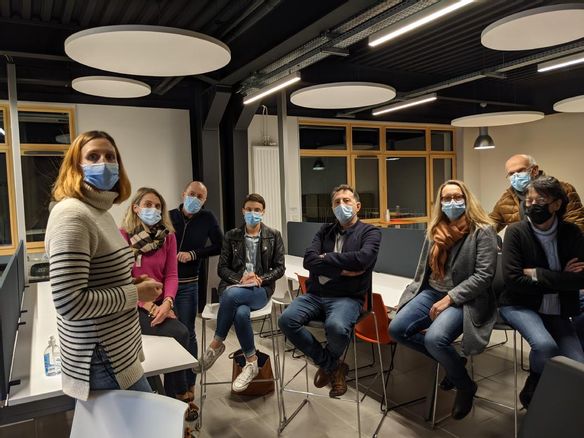 An “air bubble”, felt Muriel Gaboret, patron of Frip’Box, one of the two thrift stores of Saint-Amand-Montrond, after her participation in the afterwork organized Thursday, at La Passerelle, on the theme ” Define its objectives to be more efficient in 2022 ”.

“It did me good to see other business leaders, to have other opinions, to share ideas and to put things into perspective”, confides the shopkeeper, who still keeps the mark of the “slap in the face. ”Received on the announcement of the first confinement, in March 2020, when she had just opened her shop, in rue Porte-Mutin with, in mind, her credibility, clientele and financial objectives to be achieved on the first year of activity.

“The idea is to offer a meeting every six weeks or so, for all business leaders in the area, with, each time, a different theme and speaker”.

The discussions, led by Hélène Coucoureux, business coach, reminded her in particular of this “pleasure of going to work”, for this professional project which had been close to her heart for a long time. “It’s true that when you’re inside, you don’t always see these positive points … In addition, with meetings like these, in nice and welcoming premises, you are really in the local economic context”, a- she appreciated.

La Passerelle, an economic development tool where young local entrepreneurs have found solutions and answers to their needs

This afterwork was the second of the meetings which are now offered to businesses in the Cœur de France community of municipalities, at La Passerelle, its success workshop dedicated to economic development. The first was held in October on cybercrime, in the form of a breakfast.

“We are testing, to see which is the best formula,” indicates Amandine Bayet, coordinator at SEM Territoria, a semi-public company to which Cœur de France has entrusted the management of La Passerelle. The idea is to offer a meeting every six weeks or so, for all business leaders in the area, from the micro-business, with, each time, a different theme and speaker ” .

Invitations are made through the La Passerelle newsletter. A schedule has been drawn up, until June, for these free times and followed by a cocktail allowing less formal discussions.

These coming months include, among other things, the general data protection regulation, the carbon footprint, the assimilation and handling of commercial objections from customers, etc. So many tools that business leaders can come and equip themselves with.

The entrepreneurs were received at La Passerelle, the site dedicated to the economic development of the territory

“We hope that these meetings, which tend towards the creation of the business club, will arouse emulation”, encourages Amandine Bayet, who relied on the webinars previously organized by the SEM territoria at the Bourges nursery. , to build the program and choose the speakers.

“We will see directly with business leaders which niche is most favorable to them, morning or evening. We also want them to tell us their expectations and the themes that might interest them. The questionnaire on this subject is ready to go. “

For Daniel Bône, president of the Cœur de France community of municipalities, this new initiative “really helps to place La Passerelle on its primary objective”.