What to know to better face menopause – Blue Suitcase 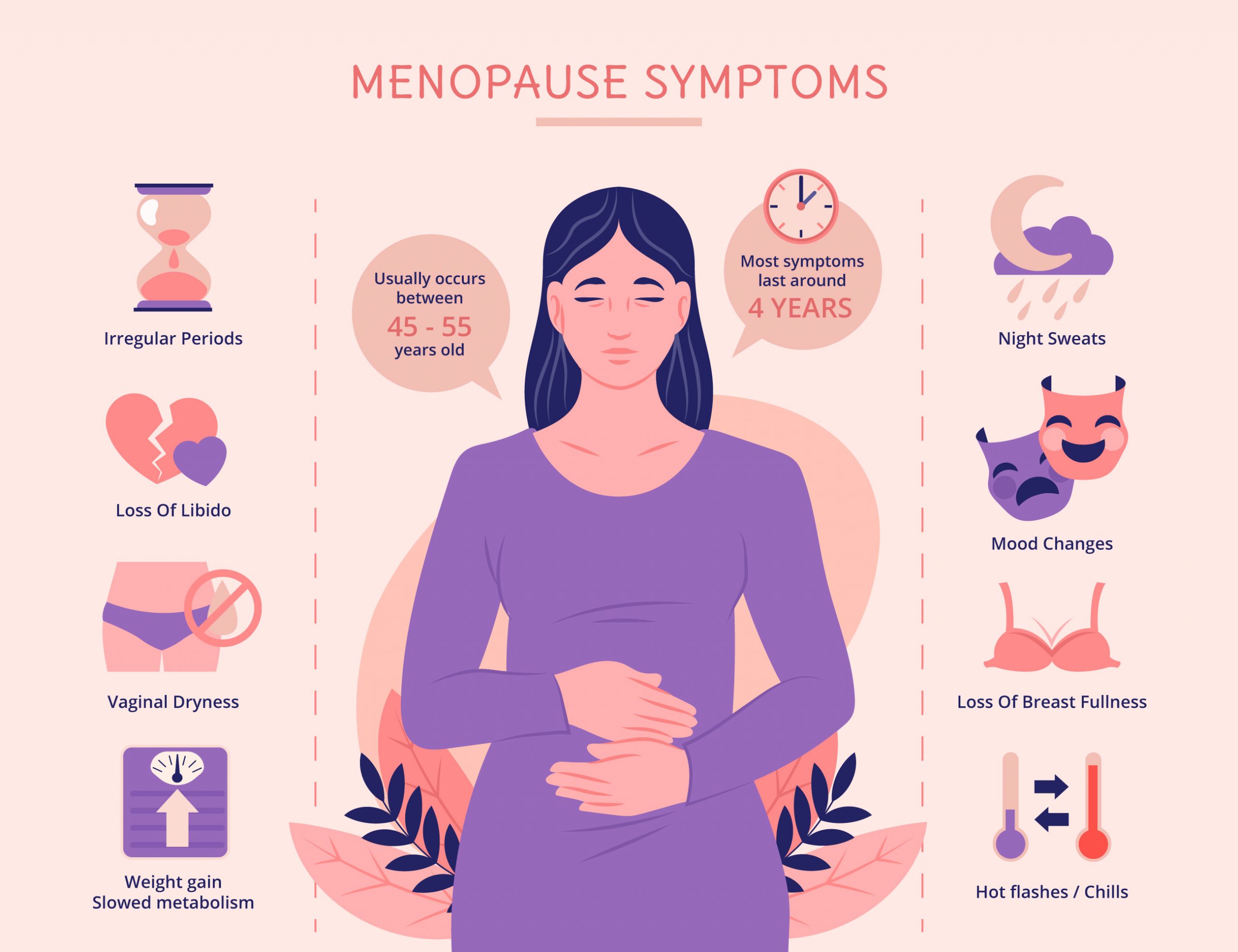 In an interview given at the Edinburgh Wellbeing Festival in May 2022, the journalist and author Sam Baker said that she began to suffer from strong psychological disorders when she was 46 and that she only understood what it was after: “It took at least two years before I figured out what was happening to me. I couldn’t find information anywhere. I felt really alone.” What was happening to Baker was actually a physiological process, which the author struggled to recognize not only due to the complexity with which it manifests itself but above all due to the difficulty in finding reliable and clear information on the subject: Baker was entering menopause .

Menopause is a physiological stage in the life of women and of people who were assigned the female sex at birth and consists in the end of the reproductive function of the ovaries and their production of estrogen hormones. The onset of menopause is defined by the disappearance of menstruation for 12 consecutive months: this tends to happen between 45 and 55 years of age. It can also happen that a premature menopause occurs (before the age of 40), early (before the age of 45) or late (over the age of 55), or even an induced menopause as happens for example in those who must undergo specific medical treatments .

The phase preceding menopause is called ‘perimenopause’ and can last several years. This can present a wide range of symptoms and physiological alterations, due to the fluctuation of estrogen levels, which can also significantly affect people’s health and daily life. First, since estrogen plays an important role in both maintaining bone density and protecting the arteries, a decline in their production can increase the risk of cardiovascular disease and bone and joint disease, such as osteoporosis.

As for the symptoms, in addition to the irregularity of the cycle, the most common are hot flashes, night sweats, vaginal atrophy and changes in mood. In some cases, depressive symptoms and clinical depression may occur due to hormonal changes or insomnia.

In general it is very difficult to establish which symptom is entirely due to the physiological changes that occur in the phase preceding menopause and what the consequences are. For example, irritability, anxiety and depressive symptoms can be caused by estrogen fluctuations, but also be a direct consequence of sleep disturbances, and sleep disturbances themselves can be identified as a symptom of perimenopause or as the effect night sweats that keep you from sleeping.

However, it is certain that these symptoms can have a major impact on the person’s psychophysical well-being and, in some cases, even become extremely debilitating. If in fact it is true that many people go through menopause with mild (but still present) symptoms, it is also true that cases of serious and prolonged disturbances are not uncommon. Many women have taken a break from work, switched to a part-time contract or quit due to disabling symptoms, decisions which in some cases have also come due to the lack of policies, measures and support in places of work. In her book on menopause (The shift), Baker said that memory lapses, a sense of emptiness, mental confusion had led her and many of the women she interviewed to think she had developed dementia praecox: “If I had known that those symptoms were due to perimenopause and not that I was seriously losing control, I would have sought professional help much sooner,” Baker wrote.

Seeking help or support when the first symptoms of menopause appear is actually not easy or obvious. For transgender and non-binary people in perimenopause, who are talked about even less than for cisgender women, this phase of life can be traumatic and difficult to deal with and talking about it can in itself constitute a violent experience as well as, in some cases, lead to a convict coming out. As far as cisgender women are concerned, the reticence is mainly due to the gender role attributed to them. Helen Bennett, a specialist menopause therapist, explains a Blue suitcase:

Many women report feeling ashamed about the transition to menopause. They may feel less feminine, less attractive, aged, damaged, or flawed. Among friends it is often not admitted that they have symptoms due to menopause because these are perceived as a sign of aging or weakness, so women experiencing a difficult menopause can feel isolated and struggle to understand who to ask for support.

Even according to a research conducted by Ipsos, it is difficult to open up among friends: in Italy, for example, people feel much more comfortable talking about age, sexuality and mental health than about menopause.

The discomfort that leads many women to not talk about their symptoms doesn’t stop at friends or family. The British gender equality organization Fawcett Society surveyed 4,014 women aged between 45 and 55 who were or had already gone through perimenopause or menopause. This study showed that 77% of women had one or more symptoms defined as “very difficult”, 69% said they had problems with anxiety and depression and 84% difficulty sleeping. Despite this, 45% of women surveyed (and 29% of those with at least five or more severe symptoms) said they had not discussed menopause with their doctor. Among the reasons that led the women interviewed to choose not to talk about it is the fear of not being taken seriously. According to Bennett, in fact, women “are often ignored by doctors when they ask for help”. Gynecologist and author Jen Gunter also spoke of women who felt that “their doctors couldn’t or wouldn’t answer their questions about the changes in their bodies.” Many said they were “dismissed with blank stares or platitudes like ‘It’s not that bad’ or ‘It’s all part of being a woman’, or being told to come back when they were ‘really menopausal'”.

Menopause is a stigma

On the other hand, a strong stigma still exists around the theme of menopause, especially in Western societies. Speaking of the United States, for example, Mary Jane Minkin, a medical expert in menopause and a professor at Yale Medical School, said: “Menopause is still a taboo subject, especially in the United States, where one of the most important goals for women is to stay young forever […] In a country where we cherish youth, it can be very difficult for a woman to “live this stage of life” because as she enters menopause, she is also getting older. And that can be hard for many women.”

The glorification of youth, especially of women’s youth, is on the other hand not an individual problem or a single country as much as a gender issue of patriarchal societies, in which an aging man acquires value and importance while a woman who age is belittled, ridiculed and set aside. According to Baker, “The problem lies in a society that sees a woman who, no longer fertile, has ‘outgrown her usefulness’ of her and no longer really knows what to do with her. Indeed, she does not see us at all ”. Hence the shame and frustration experienced by women in perimenopause, the lack of disclosure on the subject and the rather confused information on health risks, prevention, therapies and symptoms available today. As explained by Bennett a Blue suitcase “Menopause affects half of the population yet there are still many misunderstandings on the subject”.

Another significant figure reported by the Fawcett Society – and which highlights the misunderstandings and confusion surrounding the theme of menopause – is that only 39% of the British women interviewed who spoke to their doctor were offered the hormone replacement therapy (HRT). Hormone replacement therapy consists of taking the hormone estrogen that a menopausal body stops producing. Since estrogens can stimulate thickening of the endometrium, their intake is usually accompanied by the administration of progestogens to protect the uterus. In this case we speak of combined hormone replacement therapy. This therapy acts on the symptoms and disturbances due to perimenopause and menopause, reducing or attenuating them, thus restoring a dignified lifestyle. It has also been indicated as a preventive weapon for cardiovascular diseases and osteoarticular diseases, but opinions on its benefits are conflicting.

In fact, over the years a heated and often confused debate has arisen around hormone replacement therapy. In 2002, a study was published which claimed that combined HRT increased the risk of breast cancer, heart problems, strokes and venous thrombosis. This study was then questioned and refuted by other subsequent research which not only defined the therapy as safe and often necessary, but also highlighted its benefits, including the reduced “risk of mortality, heart failure or stroke myocardial”.

The topic is still quite debated and, as explained by the professor of epidemiology at the University of Oxford Jane Green, it is currently impossible to define hormone replacement therapy as safe or unsafe because a lot depends on the person. The approach recommended today to medical personnel is in fact to evaluate case by case and understand, together with the person in perimenopause, whether a therapeutic plan is useful, necessary or contraindicated.

Involvement and listening therefore become fundamental, both to restore dignity to a body in pain and to dispel myths and prejudices. In this regard, Bennett argues that there are essentially two ways to go in this sense: more “funds for research on women’s health and hormones to understand the impact these have on an individual level” and clear and accessible information . “We can fight the stigma around menopause,” she tells Blue suitcase, “talking about it, educating women, partners and healthcare professionals about perimenopause and the symptoms of the menopausal transition so that women understand what is happening to them and can be supported from the beginning”. And training and dissemination also become necessary to start talking about menopause in a different way.

Unlike what is often led to believe, the false myths and the stigma that still revolves around this theme, menopause in fact “is not a death sentence”, as Jen Gunter wrote. Not only because, with a higher life expectancy than in the past, one can now spend over a third of one’s existence in menopause and post-menopause, but also because the value of each person goes beyond their reproductive capacity.

Rather, what people in perimenopause would need are clear and accessible information on what is happening to them, on the therapies available, and on what is the best path for each of them, to live this new phase of life in a healthy and dignified way .