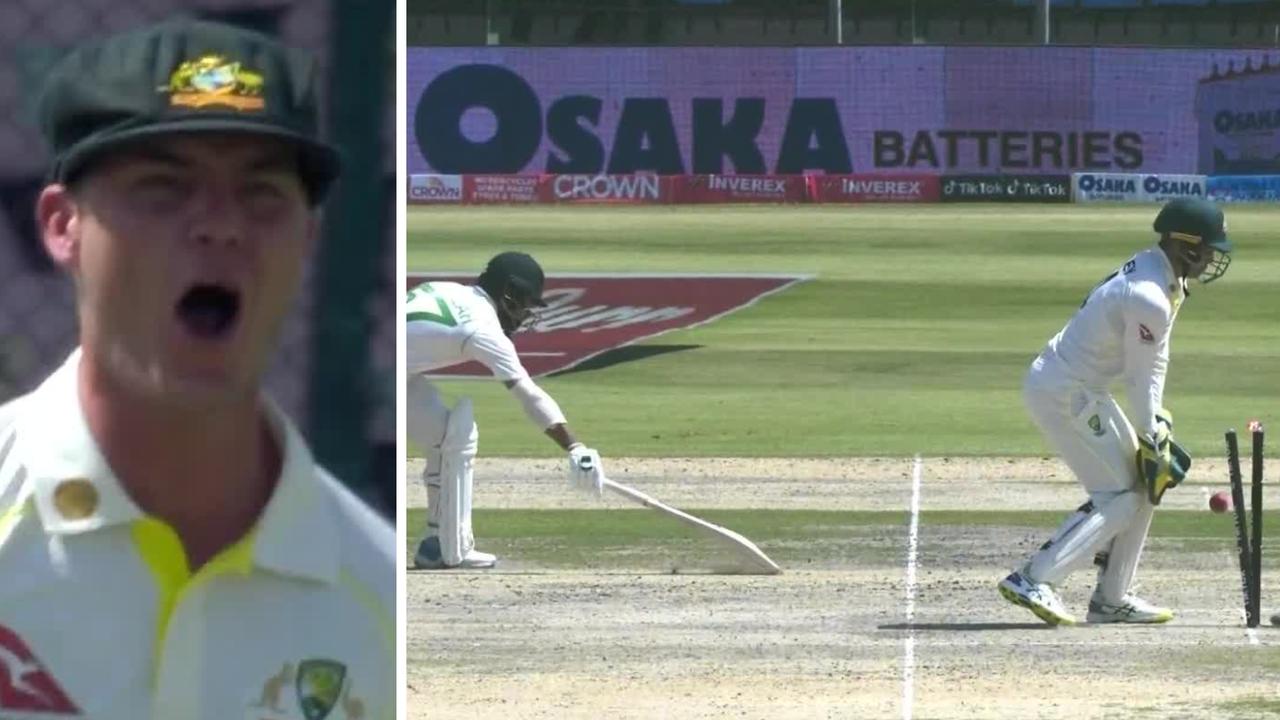 Mitchell Swepson’s moment of truth finally arrived, conceding two runs in his first over as Pakistan look to chip away at Australia’s total of 9/556d.

The hosts made it to lunch at 1/38 after Abdullah Shafique was run out by Swepson on an inch-perfect throw, with the opener departing for just 13 runs.

Imam-ul-Haq (20) and Azhar Ali (4) will continue the task of racking up the runs.

Shafique came under plenty of criticism for his role in running himself out, with commtentator Waqar Younis in disbelief as to why he elected to take the run on.

“What were they thinking,” Younis said.

“What were they doing?

“There was never a single there, and the body language of Abdullah Shafique is telling a big story here.”

Perhaps another wicket could have come earlier, as Cummins’ field positioning on during Nathan Lyon’s bowling caught the watchful eye of commentator Mike Haysman.

Cummins elected to have a long off, but Haysman was perplexed as to why they didn’t bring them closer in and put the pressure on Shafique and Imam-ul-Haq.

“This long off makes no sense at all,” Haysman said.

“Why wouldn’t you have a man in and ask him (the batsman) to go over the top?

“Maybe run past one or get an edge and hit it to covers.

Follow all the action in our live blog below!

Australia skipper Pat Cummins finally decided to declare after 189 overs of action in what was the visitors’ longest first innings in a Test since 1993.

The visitors looked to top up their total as Pat Cummins and Mitchell Starc strolled out to the crease, but Starc was dismissed with the second ball of the day, departing for 28.

Starc attempted to loft a ball over cover but didn’t get enough of the cherry as it was happily gobbled up by Azhar Ali.

Swepson got his first chance to get some international Test runs under his belt and finished 15 not out, as Cummins also exploded with a late flurry of boundaries to end the innings at 34 not out.

To do that, Australia will need some assistance for the spinners from the wicket which was slowly but surely starting to show some signs that it might spin big late in the game.

The focus will — either by declaration or being bowled out — swiftly turn to the ball for Australia on day three when Swepson will bowl his first over in Test cricket.

Australia will need him to swiftly settle into the occasion with his ability to take wickets, along with Nathan Lyon, likely key to finding a result in the Test.

It’s been a long road to this moment of truth for Swepson, who has been around the Australian Test set-up as a reserve for years but is only now making his debut.

Swepson is the first specialist leg-spinner to debut for Australia since Bryce McGain in Cape Town in 2009.

Earlier in the series, Kerry O’Keeffe said that picking Swepson was a “must” for this Test as Australia needs to know if he has what it takes to be a genuine Test option.

“We’ve got to find out about Mitch Swepson; is he the real deal? Is he Test quality?” O’Keeffe said. “They should play him.”

A sad irony for the day is that the man who long campaigned for Swepson to be given his chance, Shane Warne, won’t be there to see it.

Going back almost six years before his shock death in Thailand, Warne said “let’s keep an eye on this guy” while watching Swepson in the BBL.

Over the years that followed, Warne called for Swepson to play the first Test against India in Pune in 2017, said he should have been on the plane to South Africa the following year, and backed his selection for the Sydney Test on multiple occasions.

Warne also went on to occasionally work with Swepson in the nets — an experience the leg-spinner remains grateful for.

“I’m grateful for all the little bits and pieces he offered up,” he said.

“In my first ever Big Bash game he sent out a tweet about my bowling and pretty much then on I knew he was a supporter of what I was doing.

“It was obviously great to have the greatest leg spinner of all time endorse my leggies, it was an unbelievable feeling.”

CLICK HERE IF YOU CANNOT SEE THE BLOG ABOVE