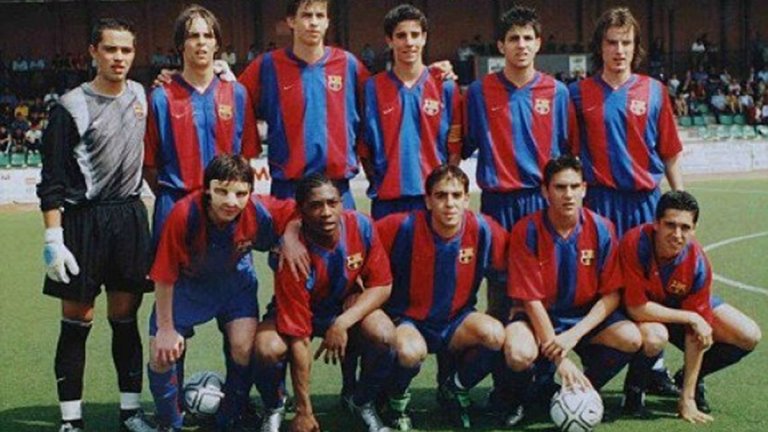 On his return as president of Barcelona, ​​Joan Laporta listed as one of his priority objectives the revival of the club’s La Masia school.

Laporta said he considered this as equally important as the financial stabilization of the club. And he is not exaggerating at all.

We may be used to Barcelona trying to buy the hottest global stars, but the club’s greatest honor has always been home-grown talent. The fact is that in almost all the golden eras of the Catalans, there has been a strong backbone of the club’s youth to the delight of the fans. And now the goal is to revive this model.

A dated photo from 2003 of Barca’s under-15 team prompted us to check how the careers of the boys in question have progressed. You will easily guess who is on the bottom left, even though he has a mask on his face.

It was he who led this “Blaugranas” team to the junior championship title without losing a game. 19 years ago, this team won several more major honors and was without competition.

The photo is before a city derby with Espanyol.

And here’s a little more about the players.

Plancheria, who doesn’t have much to do in goal for this team, goes through all the age groups but doesn’t record a single game for the Catalans’ representative team. After being released at the end of the 2007/08 season, he spent a short spell in England with Blackburn but failed to establish himself. The goalkeeper returned to Spain in January 2009 and played in lower division clubs.

Despite being an important part of such a talented and promising Barcelona team, Hinojosa never became a professional footballer. The midfielder, who is always in the same room with his friend Cesc Fabregas on trips, kicked for amateur teams, then became a children’s coach.

Pique decided to leave Barcelona shortly after this picture was taken, joining Manchester United at the age of 17 in 2004. The Spain international made just 23 appearances for the Red Devils, which is understandable given that Sir Alex has with the pair of central defenders Nemanja Vidic-Rio Ferdinand. Pep Guardiola brought him back to Camp Nou in 2008 and he has since become the most decorated defender in Barcelona’s history, winning eight La Liga titles, seven Copa del Reys and three Champions Leagues. Pique, who still plays for Barcelona, ​​also has world and European championship triumphs with La Furia.

Despite captaining several of Barca’s youth sides, Valiente has been unlucky to break into the men’s team, for whom he has only made two Cup appearances. The centre-back left Camp Nou in 2008 and had a brief stint at Sevilla before finally establishing himself as a regular at Valladolid, making 157 appearances in all competitions during his five years at the club. After leaving the team in 2015, he played for Maccabi Haifa, Jupen and Partizan Belgrade. The 35-year-old returned to Spain to strengthen Sporting Gijon in the summer of 2019 and was a key player for the Segunda Division club for three years before moving to Indian side Goa in June.

Khiribet was taken into Barcelona’s academy on the same day Lionel Messi arrived. However, their football paths are totally different. “I was amazed by him – he admitted to Goal in 2017 – I realized that my physical data opened the doors of the club for me. I was 1.70 m at the age of 12, and he was not 1.50 m.” Unlike Messi, the defender never recorded a game for the Blaugrana’s first team and was released at the end of the 2005/06 season. He plays in teams from the lower divisions and still wears the Artesa team from the sixth echelon.

From La Masia, Fabregas joined Arsenal’s academy in 2003. “I was 15 and I was the captain of this team, everyone respected me – he told The Locker Room. – But above me was Andres Iniesta and other players who they were looking for their breakthrough and they had the talent to do it. One day an Arsenal scout came to speak to my parents. The man told me he had come to watch me more than 50 times and that I was born to play for Arsenal and in the Premier League .” Cesc became the youngest player in the Gunners’ first team in October 2003, before becoming one of the best midfielders in the world under Arsene Wenger.

The Spain international was lured back to Camp Nou in 2011 and went on to make over 150 appearances, winning the La Liga title and the Copa del Rey.

In 2014, he returned to England to play for Chelsea. After winning two Premier League titles during his four-and-a-half years at Stamford Bridge, the 35-year-old moved to Monaco and is now at Italian Serie B side Como.

After failing to break into the Barcelona first team, Moreno joined Terrassa in 2007, where he was reunited with La Masia team-mate Roger Hiribet. Since then, the midfielder has gone through 10 more clubs in the lower leagues of Spain, and now plays for the fifth division Real Jaen.

Plasuelo has only made it to third team Barcelona and is heading for the Mallorca double since leaving the Blaugranas in 2007. He is another player on this list who has become a journeyman in the lower echelons, going through a number of unknown teams that few know about outside Catalonia.

The son of former Deportivo La Coruña goalkeeper Jacques Songo’o, Franck failed to break through at Barca and joined Portsmouth in 2005. He made just two Premier League appearances in the 2005/06 campaign before beginning his run of transfers under rent. The wing passes Bournemouth, Preston, Crystal Palace and Sheffield Wednesday. Songo’o returned to Spain to play for Real Zaragoza in 2008 and helped the team win promotion to La Liga in his debut season, but was released a year later. The former Cameroon international spent brief spells in America and Greece before deciding to retire at the age of 27 in 2014.

He’s doing well… Let’s not rehash all his accomplishments, shall we?

It is Clause who often stands between Messi and Fabregas in the execution of static situations. The winger is one of Barca’s brightest talents at the turn of the century and is tipped for a bright future. Unfortunately – it doesn’t work out for him.

Klausi left the Camp Nou in 2006 and began a nomadic career in the lower Spanish divisions, going through 14 different clubs. The 35-year-old joined fifth-tier Recambios Colon last year. He also completed an electrician course, securing himself for life after football.