Witness.. A teacher was injured by a lightning punch while trying to break up a quarrel between two students inside a school in America

Home » World » Witness.. A teacher was injured by a lightning punch while trying to break up a quarrel between two students inside a school in America 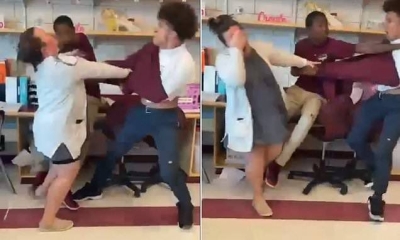 Exclusive translation: A high school teacher in Louisiana, America, was punched in the face after trying to break up a brutal fight between a number of students in the classroom.

After the violent blow, the teacher let out a shriek and was seen covering her eyes with one of her hands while the two boys continued throwing punches at each other.

As some chairs and backpacks were pushed around the room in the chaos, some students were heard shouting, “Enough!” ‘Stop!’.

It wasn’t clear if the teacher fell to the floor after being hit or if she walked out of class, but a student was heard yelling, ‘Damn! She broke it.’ According to the Daily Mail.

The school explained that the teacher, who was bruised and swollen in her face, did not suffer from a broken nose, as some students initially believed.

The school indicated that the two boys involved were arrested and the school demands the opening of a criminal investigation.