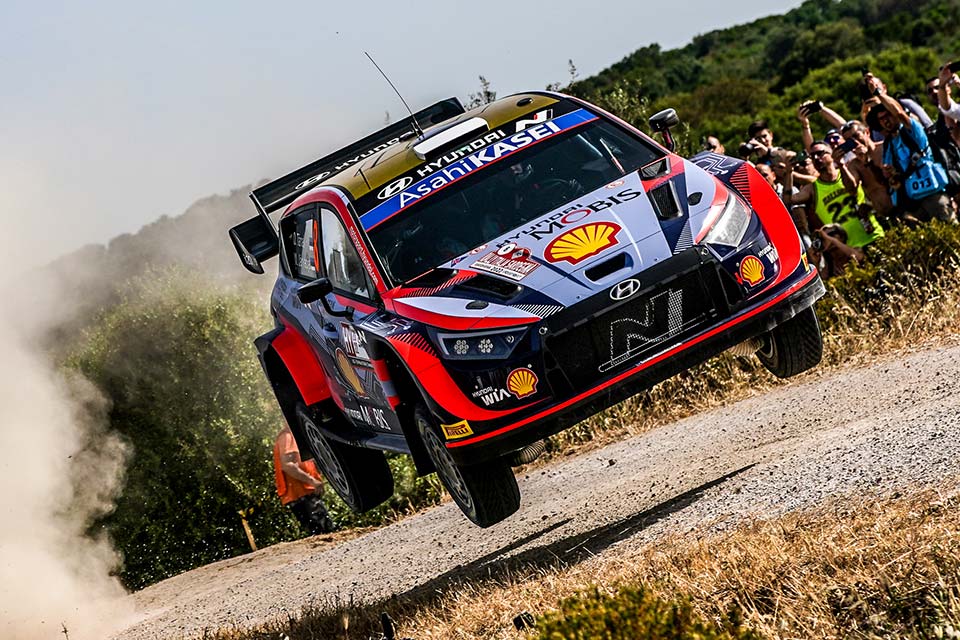 Finally, a triumph for Hyundai, which has not happened since Catalunya 2021. Ott Tänak/Martin Järveoja gave the Hyundai i20 N Rally1 its first triumph, in a race that they dominated almost completely.

A balloon of oxygen for Hyundai, which, after many problems, returns to the path of triumphs, showing that the new car was born well, but with a late delivery.
The Sardinia Rally usually smiles at Hyundai, with three victories in the last four years, and we finally saw a Tanak, who without any problems, showed what led him to be champion in 2019.
It has long been known that Hyundai has always been the team with the most retirements, or at least ex-aequo, several times in recent years we have seen their drivers dominating races, or in the lead and losing it due to ‘gremlins’. ‘ mechanics and as was also known, whenever reliability gives the team a break, the drivers always have a much better chance of winning, and that’s exactly what happened in Sardinia.
It is obvious that this is very good for the championship, as this is only the second race on dirt roads of the year, and now that it has been realized that Hyundai Motorsport is already ‘hitting needles’, the range of candidates to win increases. substantially because at least Tanak and Neuville will always be favorites.
It remains to be seen whether the reliability improves, as it is not necessary to go further than this same Sardinian Rally, to realize that this is still an open item at Hyundai: just look at the problems that Thierry Neuville had.
This issue of reliability was already posed at the beginning of the season, as they were new cars, and the issue was very visible in the first races for Hyundai’s sides, but at least here in Sardinia, Tanak had a clean race, and the result was immediate sight.
Another thing we noticed in Sardinia is that M-Sport will hardly fight for the championship, even though they can win here and there. There are no pilots for that. Craig Breen is a good driver, but he is not at the level of the top two at Toyota and Hyundai. But he’s getting better, and he’s getting more and more comfortable with the car. He can win, here and there, continue to be regular, as he has been, but doing what Sébastien Loeb did in Monte Carlo and on the 1st morning in Portugal is not for him. The frustration is that without a top driver, M-Sport will always produce numbers below car level. What is a shame.
Toyota had a kind of ‘coitus interruptus’ in Sardinia. Kalle Rovanpera had a lot more difficulties opening the road, Esapekka Lappi was replacing in a fantastic way, Sébastien Ogier, was leading the rally, but he crashed ingloriously and retired. Elfyn Evans is having a really bad time. Only in Portugal was he at his level. Some bad luck, but also some self-inflicted.
Finally, it remains to be said that the former Rally Costa Esmeralda was a good proof of the European Rally, but it was not by chance that it never belonged to the World Cup until the 20th century. XXI.
The race is different, as it is very technical, narrow, hard sections, the landscapes by the sea are of interesting scenic beauty, but the sections, for example, compared to the Portuguese, are something like the side of the road and the road to Beira. I miss Sanremo with its asphalt stage and the rest of the race in Tuscany.

short film
The story of the rally was simple: Elfyn Evans went to the front, taking advantage of the good position on the road, followed closely by Ott Tanak with Thierry Neuville very distressed by the dust, wasting time.
With everyone still very close together, Esapekka Lappi went to the front, three riders fit in three seconds. Then it was Tanak’s turn to lead when Evans pulled out with engine problems stemming from a rock that damaged the crankcase. Tanak and Lappi were fighting second by second, Lappi went to the front in PE7 after Tanak had a problem with the transmission of the Hyundai.
At the start of the 2nd day, Lappi retired due to an accident and from then on Tanak was 21.5s ahead of Craig Breen. Basically Game Over in the fight for the front.
The interest shifted to the fight for 2nd place with Dani Sordo, who started the rally badly, improving a lot and getting closer to Breen, who reacted well. Between advances and retreats, the M-Sport rider kept the Spaniard well behind, and so we reached the last day with everyone waiting for the PowerStage. With no setbacks, everything was decided on Sunday’s start.

unstoppable tanak
Ott Tänak/Martin Järveoja (Hyundai i20 N Rally1) started the rally in second, went ahead in PE4, but in the afternoon a failure in the transmission of a wheel, lost time and the lead of the race. On the second day, he quickly went ahead, even without Lappi’s slip, in the splits he was already leading, and from then on he was unstoppable, and even controlling and managing the pace, he won sections after sections. He was always in control of the operations, he increased the margin for Craig Breen, first to 29.8s, then to 30.9s, 37.2s, the rally was won, it was just control.
Craig Breen/Paul Nagle (Ford Puma Rally1) was always in the fight, but for 2nd place.
They ended the 1st day 15.5s from the front, in 4th, good pace, but small mistakes reversing the time gained with this pace. On the 2nd day, good fight with Dani Sordo. He and the Spaniard quickly passed Pierre-Louis Loubet, Breen saw a tire come off the rim. Sordo was 1.5s away but Breen always reacted and the Spaniard’s mistake in PE16 dug the hardly recoverable gap.
Dani Sordo / Candido Carrera (Hyundai i20 N Rally1) started the 1st day badly, but improved and reached 5th place 16.1s from the front, putting themselves in the fight for the podium. On the 2nd day, small mistakes put him out of the fight for 2nd place. For example, a hood was not closed, making it difficult for him to see, and especially the time he lost with the ‘choking’ of the Hyundai’s engine after crossing a stream.
The best result of Pierre Loubet/Vincent Landais (Ford Puma Rally1) was a 7th place in the WRC, with a top car, but this time, a three-position driver: 4th place, and a great display leaving the M -Sport frowning.
He started the rally with dust problems, still he was 3rd, he lost two positions after a spin, he returned to 3rd place and always continued to do his best rally of the WRC era. He became the best Ford, he did well not wanting to go after Breen and Sordo, as he still doesn’t have the ‘leather’ for that, and kept fourth place.
Kalle Rovanperä/Jonne Halttunen (Toyota GR Yaris Rally1) were fifth and…increased the championship lead. No dust, but with lots of land to ‘clean up’, there was no ‘miracle’ like in Portugal. It gave up time and at the end of the 1st day it was 8th at 1m13.1s. He regained positions, finished fifth but more than three minutes behind the winners.
Takamoto Katsuta/Aaron Johnston (Toyota GR Yaris Rally1) were sixth, in the dullest rally in recent times. Did the ‘defeat’ in Portugal affect him? He made some mistakes, the biggest one in PE11, but he always walked through modest positions. A ‘weak’ rally compared to what it has done recently.
Gus Greensmith/Jonas Andersson (Ford Puma Rally1) left early with no hope of a good result after a technical problem following a spinning top, giving up almost two minutes on the 1st day. The car would not start, and the result was spoiled.
Adrien Fourmaux/Alexandre Coria (Ford Puma Rally1) started the rally in 6th, the driver was gaining confidence and doing a better race than in Portugal, he had small mishaps, like everyone else, but what was not on the program was having returned crashing, this time in the last section of the 2nd day, when it was already under pressure from Rovanpera. Better to have let him pass without a fight than to hit him again. He walked too long without anyone around, but when there was, he smeared the paint…
Elfyn Evans/Scott Martin (Toyota GR Yaris Rally1) is having a difficult season, the pace is there, but so is the bad luck. Abandoned after having passed the lead. A touch of a rock, and a few moments later, engine temperatures ‘soaring’. Abandonment was inevitable.
He had problems again, in PE16, with a broken suspension. Another unlucky rally.
Thierry Neuville/Martijn Wydaeghe (Hyundai i20 N Rally1), if in Portugal they had lost more than a minute with a driveshaft failure, this time, a new transmission failure resulted in even more wasted time. It was soon Game Over for a good result.
It was going well in the second, lost a few more seconds to save the life of a dog that crossed the road, but in PE12 it overturned.
Esapekka Lappi/Janne Ferm (Toyota GR Yaris Rally1) initially made Sébastien Ogier forget, they quickly moved to the front of the rally, Tanak took the lead after Lappi punctured, not wasting much time getting 3.7s ahead. Then the Estonian had a mechanical problem on PE7 which allowed Esapekka Lappi to take the lead. Then the accident. A boulder in the road catapulted him out of the way and he ran out of control and crashed into everything in front of him. It was very unlucky.
In short, Hyundai welcome back, and the promise of a good fight for the triumphs in the remaining seven races. All that’s left is that M-Sport can fight for triumphs without needing Sébastien Loeb. Next comes Kenya, where Loeb and Ogier will be…
Nikolay Gryazin/K. Aleksandrov (Škoda Fabia Rally2 evo) won the WRC2 Open 28.0s ahead of Jan Solans/Eusebio Sanjuan (Citroën C3 Rally2) with Jari Huttunen/Mikko Lukka (Ford Fiesta Rally2) third at 33.1s. Chris Ingram/Craig Drew (Škoda Fabia Rally2) were fourth at 38.9s