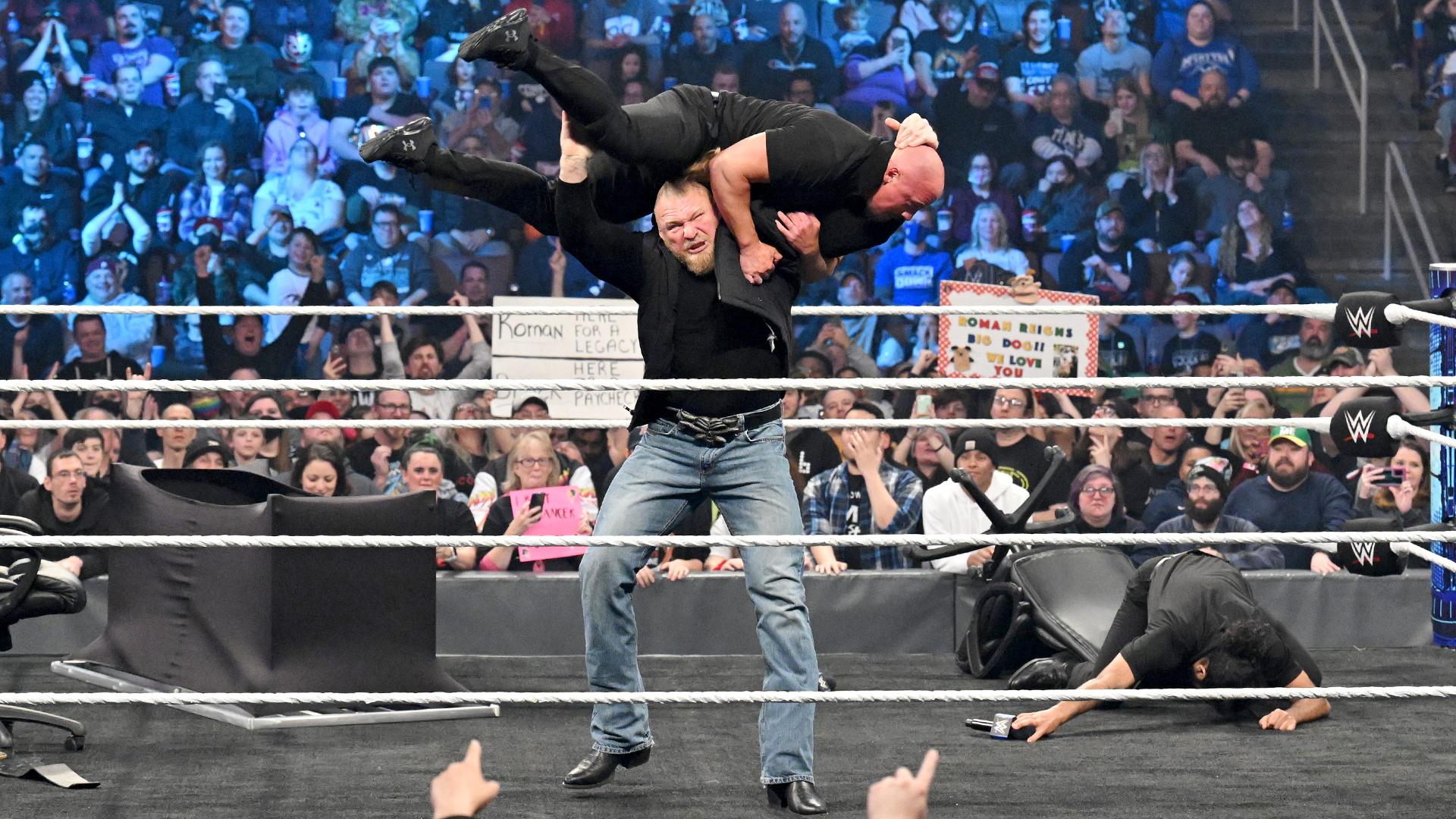 The commentators are Michael Cole and Pat McAfee.

– Tonight is WWE SmackDown, the blue show starts on a video concerning the story between Brock Lesnar and Roman Reigns, respectively WWE champion and Universal champion. The commentators welcome us and announce that the match at WrestleMania 38 between the two champions will unify the two belts and be “the greatest WrestleMania match of all time”. Michael Cole is in the ring and introduces Ronda Rousey who enters. Once in the ring, Cole reminds her that it’s been three years since she stepped into the WWE ring and asks her why she came back to the Royal Rumble.

Ronda Rousey responds that she got pregnant. She knew she wanted to come back and win the Royal Rumble to get her second ticket to the WrestleMania Main Event. Michael Cole recalls that Ronda Rousey was the first American woman to win a judo medal at the Olympic Games, the first woman in the UFC Hall of Fame or one of the first three women in the Main Event of WrestleMania. Rousey says she wants to tap out Charlotte Flair to win the title. Michael Cole shows us footage of what happened at Elimination Chamber.

Charlotte Flair’s music plays next. Charlotte Flair says she felt sorry for Ronda Rousey at Elimination Chamber, but that won’t be the case at WrestleMania, where the champion will kick her! Rousey will be able to go home and have her second baby… Sonya Deville goes after Ronda Rousey from behind. Charlotte Flair takes the opportunity to attack her future opponent by being at ringside. Rousey manages to get up and throw Deville out of the ring.

– Behind the scenes, Adam Pearce and Sonya Deville relive the moment Deville goes after Ronda Rousey. Pearce is not happy and tells her that she will have a match against Ronda Rousey next week on SmackDown!

– Los Latharios make their entrance with a Kiss Cam. The New Day then makes its debut on a quad.

At the end of the match, Big E is about to crush Humberto with the quad and Kofi Kingston takes the opportunity to attack Angel. The New Day then made their Midnight Hour on Angel for the pinfall victory.

– Behind the scenes, the New Day is still on his quad and meets Sheamus as well as Ridge Holland.

– Behind the scenes, Sam Roberts is with the Usos. They say Roman Reigns is going to deal with Brock Lesnar the same way they’re going to deal with the Viking Raiders. The latter attack the champions and let it be known that they want a match for the titles!

– We review what happened in recent weeks between Aliyah and Natalya.

– In the Gorilla Position, Megan Morant is with Xia Li. The latter says that she has been waiting for this moment all her life. Natalya will need protection tonight.

At the end of the match, Xia Li lands a Spinning Heel Kick on Natalya for the pinfall victory.

– We see again the victory of Sami Zayn against Shinsuke Nakamura for the Intercontinental title last week.

– Sami Zayn enters for his celebration. He tells us that justice has finally been done, he was the victim of a mass conspiracy that cost him the Intercontinental title. He asks us to show respect to the new Intercontinental champion. He is happy to defend the title against anyone brave enough to step into the ring with him.

Sami Zayn drops his microphone and approaches him, he makes a style of going away to attack him in the back! He ends by making a first Helluva Kick on Johnny Knoxville, followed by a second!

– Backstage, Sami Zayn is with Adam Pearce and apologizes for what happened but Johnny Knoxville started it. Ricochet shows up and says Zayn wanted to be a champion fighter, so here he is! Adam Pearce confirms title match for next week.

– Sasha Banks enters, Shotzi is already in the ring. The match was about to start but Naomi joined the commentary table.

At the end of the match, Sasha Banks applies her Bank Statement on Shotzi to knock her out.

– After the match, Naomi gets in the ring, stands next to Sasha Banks and says we’re watching the next tag team champions!

– Behind the scenes, Morgan Morant is with Happy Corbin and Madcap Moss. We see what happened at Elimination Chamber. Corbin says Drew McIntyre must be worried tonight. It’s a WrestleMania-level match. He’ll show McIntyre who the real warrior is and that’s no joke.

– Drew McIntyre enters, followed by Happy Corbin and Madcap Moss. Before the match, Corbin reminds us that this is a WrestleMania-level match. Nothing would make him happier than destroying her. But Madcap Moss deserves this rematch. Both wrestlers attack Drew McIntyre.

At the end of the match, Madcap Moss ran between the ropes and Drew McIntyre landed his Claymore Kick for the pinfall victory.

– Behind the scenes, Megan Morant is with Ronda Rousey who says she’s going to show what happens when an authority figure goes overboard.

– Next week: Ronda Rousey vs Sonya Deville / The Usos will defend the SmackDown Tag Team Titles against the Viking Raiders / Sami Zayn will defend the Intercontinental Championship against Ricochet

Brock Lesnar enters and introduces himself as the new WWE Champion. He then says that if they think those security guards are going to stop him from jumping on the table to kick their asses, they’re wrong! Only him and the contract stop him. At WrestleMania, he will kick their asses! Brock Lesnar signs the contract then throws it at Roman Reigns. Paul Heyman says he’s fed up with her disrespect. If he wants to make it personal, the WrestleMania match won’t be a title unification match because he will lose his next week at Madison Square Garden.

Roman Reigns in turn signs the contract and Adam Pearce leaves the ring. Reigns then says that the Universal title is his. He will crush Brock Lesnar at WrestleMania. It’s his show and his ring. The cameraman is his. The fans who are there, they are his because they recognize him. The commentators, they work for him. The WrestleMania logo is his because he is WrestleMania! Everyone works for him… including security. Security surrounds him but Brock Lesnar smashes everyone! The show ends like this.