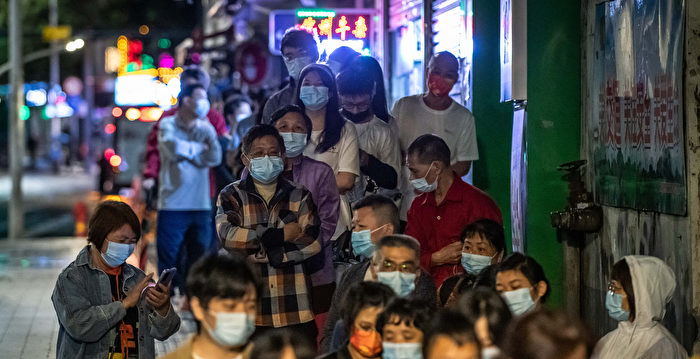 In this regard, the article “Sichuan Langzhong Nucleic Acid Testing Expenses, Even Hu Xijin Can’t Take It Anymore” published on a website in the wall pointed out that “now all government-organized nucleic acid testing is free for the public”; “According to the State Council According to the guidance, the cost of normalized nucleic acid testing should be borne by local governments”, while Langzhong “let the public bear the relevant costs and promote self-funded testing, which is obviously a very inappropriate approach.”

The question is, since the State Council has spoken out, can the officials and gentlemen in Langzhong know that “pushing at their own expense” is “contrary to the policy guidance of the state”? So what is the reason? The answer received by The Paper from a medical insurance practitioner was that “the local finances are indeed out of money”. A staff member of the local health and health commission also said, “It would have to pay for itself, (because) the government can’t afford it.” In addition, the above-mentioned article also pointed out that Langzhong risked “giving people a misunderstanding of ‘using power for personal gain'” and also reached out and “begged money from the people”, “it is easy to think that the local finances are out of money.”

In the face of many doubts, the Langzhong authorities immediately changed their tune, saying that “citizens can test voluntarily”. However, the “general public” is still very clear in their hearts that whether they can “voluntarily” is not determined by these two “supplementary announcements”. In fact, the “normalization” of nucleic acids in areas without epidemics is a kind of compulsion in itself. More importantly, the Langzhong government’s disguised response did not answer the key question of “why should the common people pay out of their own pockets”.

Obviously, governments at all levels from the CCP to the central and local governments dare not publicly tell the common people that no matter how large the scale of nucleic acid testing is, it is not “free”, and the common people have always “paid for it out of their own pockets”. It used to be “stored value consumption”, and taxpayers’ money has been squandered in the past several rounds of nucleic acid. But now the national treasury is empty, and the people themselves have to fill it. No wonder some netizens joke that the Chinese will have to pay a “nucleic acid tax” in the future.

Forcing the “nucleic acid tax” is undoubtedly eating “human blood steamed bread”. Not long ago, a research team in mainland China has calculated such an account: if “about 80% of the normalized nucleic acid costs are borne by medical insurance, and all levels of finance only need to pay about 20%”, in “the national medical insurance still has 3.6 trillion’ surplus food.” ‘”, the “2-day test for all people” can be maintained for “3 and a half years”. In this regard, many netizens exclaimed that the medical insurance fund handed over by the Chinese would be wiped out in only “three and a half years”.

It seems that this statistic is not alarmist. Otherwise, the CCP Medical Insurance Bureau will not immediately order to stop using medical insurance to pay for nucleic acid. Langzhong will not be under the pressure of being verbally criticized to reveal the so-called “free” painting that looks beautiful, embarrassing the leaders of the CCP and the State Council. Whether it is the Medical Insurance Bureau or the local governments, it should be very clear that the use of nucleic acid to cut leeks is no longer a sickle, but a harvester.

Facing such a giant harvester, the officials and gentlemen in charge of finance and taxation in various places have long been daunted. As early as 2017, the official statistics of the Communist Party of China concluded that “in the first half of the year, only Guangdong, Jiangsu, Zhejiang, Fujian, Beijing and Shanghai had a ‘fiscal surplus’ among the 31 provinces, and the remaining 25 provinces could not cover their expenses.” . By the first half of 2021, only Shanghai will have a “surplus”.

Since 2022, the Beijing authorities have insisted on “zeroing out” and engaged in “the most thorough prevention and control”, and the fiscal revenue of mainland China has also fallen rapidly. As of April, Nanjing dropped by 54.9%, Tianjin by 51.3%, Suzhou by 49.6% and Shenzhen by 44.2%. Although Shanghai has not announced the rate of decline, it has revealed the tragic reality of “65.48 billion yuan in bonds issued on May 16”. In this regard, some economists in mainland China pointed out that “the issue of bonds cannot solve the problem”, because “expenditures such as clearing and epidemic prevention, the cost of maintaining stability is very large.”

If it were not unsustainable, Langzhong, Sichuan would not have cut leeks so openly when the public sentiment was turbulent. Statistics show that Sichuan’s fiscal deficit in 2020 ranks first among the provinces, approaching 700 billion yuan. Under the circumstances of “deteriorating real estate”, “unable to sell land”, and “many companies have closed down”, nucleic acid is probably the only financial source in many parts of the mainland.

The question is, forcing the common people to unify and make nucleic acid at their own expense, can the local finance turn losses into profits? Taking Langzhong as an example, based on its permanent population of 620,000, if each person pays 3.5 yuan for nucleic acid once a week, the total income is 2.17 million. This does not include the expenditures for third-party testing agencies and “expenditures such as clearing, epidemic prevention, and stability maintenance.” Assuming this fee continues to be collected from the 83.72 million people in Sichuan (as of the end of 2021), it will be 293 million a week. According to the calculation of 52 weeks in a year, there are more than 15.2 billion in a year. But unfortunately, even if the government puts all this money into its finances, it will take 46 years to make up the past $700 billion deficit.

It is impossible for the economy to return to normal until the “zero” day is over. More and more Chinese are unemployed, and even survival is a problem. Will they obediently pay the “nucleic acid tax” to the government for decades? Continuing to impose violent expropriation, the local government will become the source of public grievances and make people change at the touch of a button. Both ends are roasted, and such a day must be difficult to endure. If you want to be corrupt, you have to live in fear, which seems to have become the fate of every big and small official who works for the CCP.