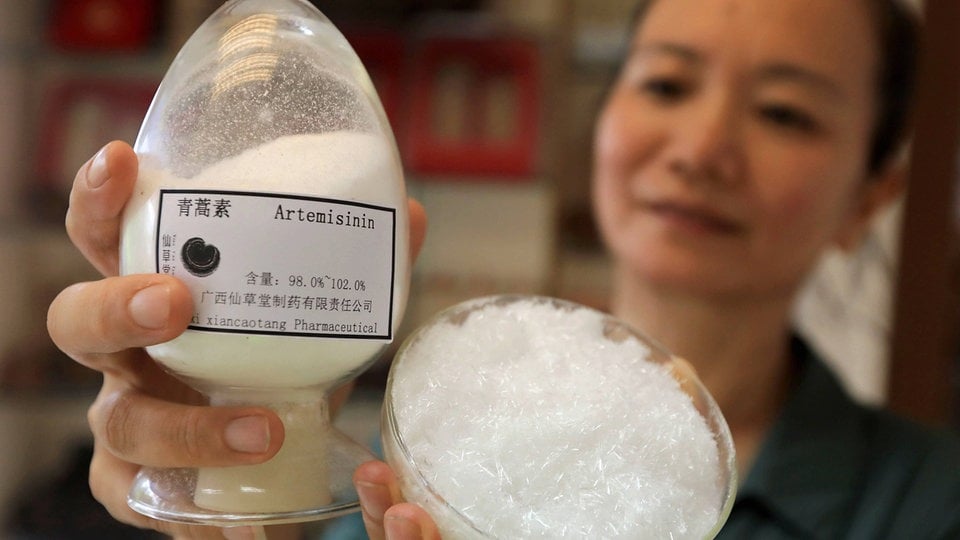 However, it is not about salt, but about complicated molecules that also swim in complicated solutions. Institute director Prof. Andreas Seidel Morgenstern explains: “This is special know-how here in Magdeburg that we can separate complicated mixtures in order to separate out certain target molecules, even in the presence of sometimes very similar substances. These are very complex separation processes. Among other things, set we use auxiliaries that can differentiate between very similar molecules. But we want to specifically extract one substance. Everything else should remain in the solution. ”

The Magdeburg procedure has caused a stir internationally. It’s about the production of artimisinin. The substance was practically rediscovered 50 years ago, as an indirect consequence of the Vietnam War. When malaria raged in the combat area, China feared that the disease would spread to its own territory. Mao Tse Tung ordered an antidote to be found: “The order went to an institute that was familiar with herbal medicine. Researcher Tou Youyou looked at over 2,000 plants and consulted ancient Chinese records. There were indications that some plants work very well with attacks of fever. But the important point from a technical point of view was that you have to extract at low temperatures, “explains Andreas Seidel Morgenstern.

Annual mugwort is the name of the plant that must not be boiled. Tou Youyou received the Nobel Prize in 2015 for her discovery. However, there is a problem with mugwort: it produces very little artimisinin. Two to three kilograms can be gained from two tons of dry material.

Three scientists took on the problem: Kerry Gilmore from Connecticut, Peter Seeberger from Potsdam and Andreas Seidel Morgenstern from Magdeburg. The first realization was that the plant produces a preliminary product. Second insight: This preliminary product can be technically ripened after harvesting: “Chemistry can help here by bringing this preliminary stage together with artificial light, so to speak imitating the sun. In addition, there is a photocatalyst that controls the reaction that takes place in the plant expires, accelerated. We are able to do that in five minutes. In the end, production was doubled, “says Seidel Morgenstern.

The yield is therefore significantly increased. But the process has another advantage. In spite of the high scientific effort, it does not require large and complicated systems: “You push the leaf mass through a kind of meat grinder, and we can get almost everything out very effectively in a relatively short time. You don’t want to lose anything. But the technology is simple. It can be installed close to the farmers, so to speak. It doesn’t have to be complicated, sophisticated production facilities. The approach is to make it as simple as possible, “explains Seidel Morgenstern.

The demand is increasing

For this development, the three researchers received the award for affordable green chemistry, awarded by the American Chemical Society. Former tobacco farmers in Kentucky are now testing the cultivation of the plant. The demand for anti-malarial drugs could rise, also because of climate change. Seidel Morgenstern also explains:

“In these Covid times, things like this are completely forgotten, namely that there are very, very many people who die of malaria. And the number will increase because climate change is shifting the living areas of mosquitoes, the mosquitoes that transmit it India could be hit particularly hard. That is why the drugs have to become cheaper. In addition, there is the great problem of drug counterfeiting. Because people have to save, they buy cheap drugs and the active ingredient is not in it. ”

Read also  Planet Mars: privileged observation Tuesday thanks to the phenomenon of opposition | News | The Daily

Incidentally, there have of course also been attempts to produce artimisinin artificially. However, the molecule is very complex and requires a great deal of technical and financial outlay. Process engineer Andreas Seidel Morgenstern admits that nature is often a lot more elegant than its technical replica.