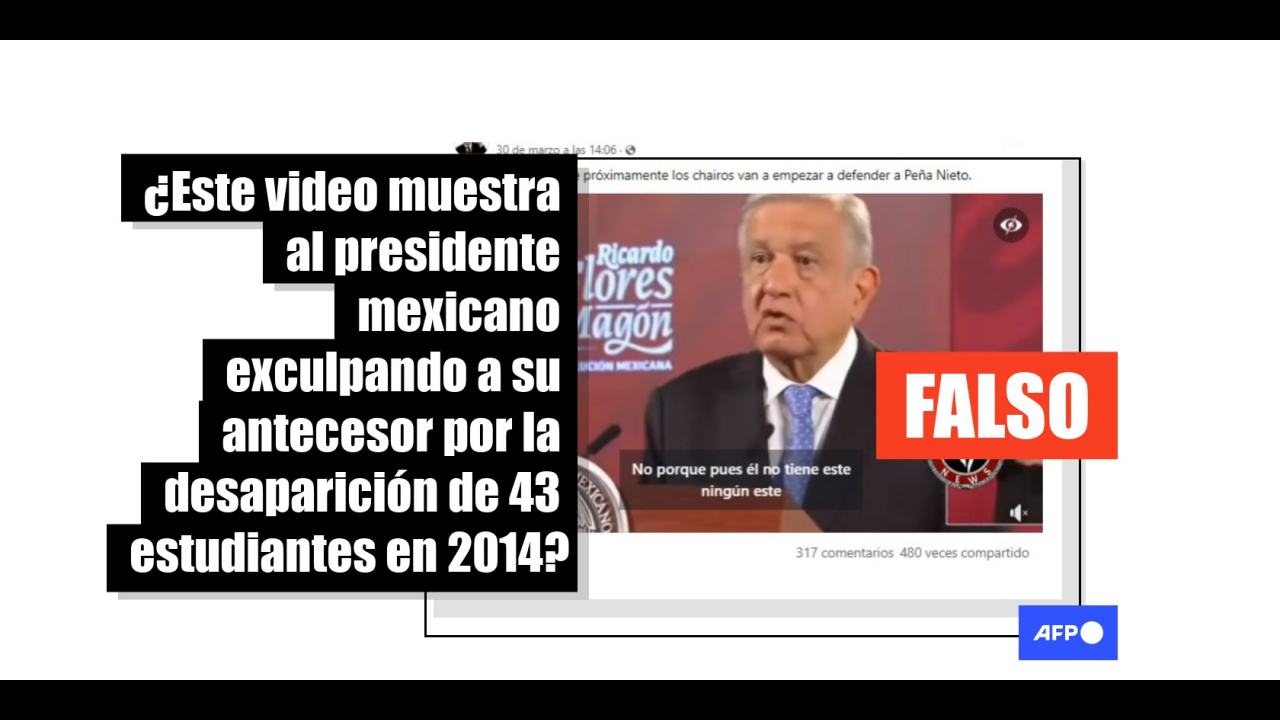 A video in which the president of Mexico, Andrés Manuel López Obrador, apparently assures that his predecessor Enrique Peña Nieto (2012-2018) “has no involvement” in the disappearance of 43 students in the state of Guerrero (south) in 2014 It has been shared hundreds of times on social networks since March 30, 2022. The recording shows part of the president’s press conference that day, but it is manipulated. The original video reveals that, when making this statement, López Obrador was referring to Secretary of the Navy Rafael Ojeda Durán, not Peña Nieto.

In the sequence broadcast on Facebook (1, 2), Twitter (1, 2) and TikTok, a journalist is observed asking the president: “Do you know, are you aware, if this investigation contemplates the statement of former President Enrique Peña Nieto?”. To which López Obrador would have responded: “No, because he has no involvement in this matter.”

The exchange between the journalist and the president occurred after on March 28, 2022, a commission of independent experts accused Mexican authorities of hiding key information about the disappearance of 43 students from the rural normal school of Ayotzinapa, Guerrero (south), in September 2014.

“The authorities at that time had practically minute-by-minute information on what was happening”Claudia Paz, from the Interdisciplinary Group of Independent Experts (GIEI), assured the press that day.

The experts also showed an unpublished video that portrays elements of the Navy in a garbage dump in which, according to the Peña Nieto government, the bodies of the students had been thrown.

However, López Obrador’s response that appears in the viral sequence did not refer to Peña Nieto.

The official broadcast of the president’s press conference held on March 30, 2022 shows that the reporter’s question occurred at minute 1:31:32.

Immediately after the questioning, López Obrador replied: “The investigation is ongoing, it is not over yet. This was a report provided by independent experts who are assisting in the investigation. Still need to move forward. The sailors who can be seen to be in the garbage dump and also the superior commanders are barely declaring or have just done so, but not long ago”.

After that answer, at minute 1:32:38, a reporter asking questions without a microphone is heard at a lower volume. “Also Admiral Ojeda, Mr. President?”alluding to José Rafael Ojeda Durán, current Secretary of the Navy and who in September 2014, when the disappearance of the students occurred, was commander in the port of Acapulco, about 275 km from where the crime occurred.

López Obrador responds a few seconds later: “No. Because, well, he has no involvement in this matter.”

Both the next question in the video and López Obrador’s subsequent comments refer to Admiral Rafael Ojeda.

The transcript of the press conference also shows the full dialogue and shows that the viralized video was cut to omit the response of the Mexican president to the question about a possible statement by Peña Nieto regarding the case of the Ayotzinapa students.

After the exchange broadcast on networks, the same journalist asked López Obrador at minute 1:39:36 if he thought that the actions of the Armed Forces in the events of 2014 could have occurred without Peña Nieto’s knowledge, to which the president replied: “It is very difficult for the president not to find out; more, when it comes to a delicate matter”.