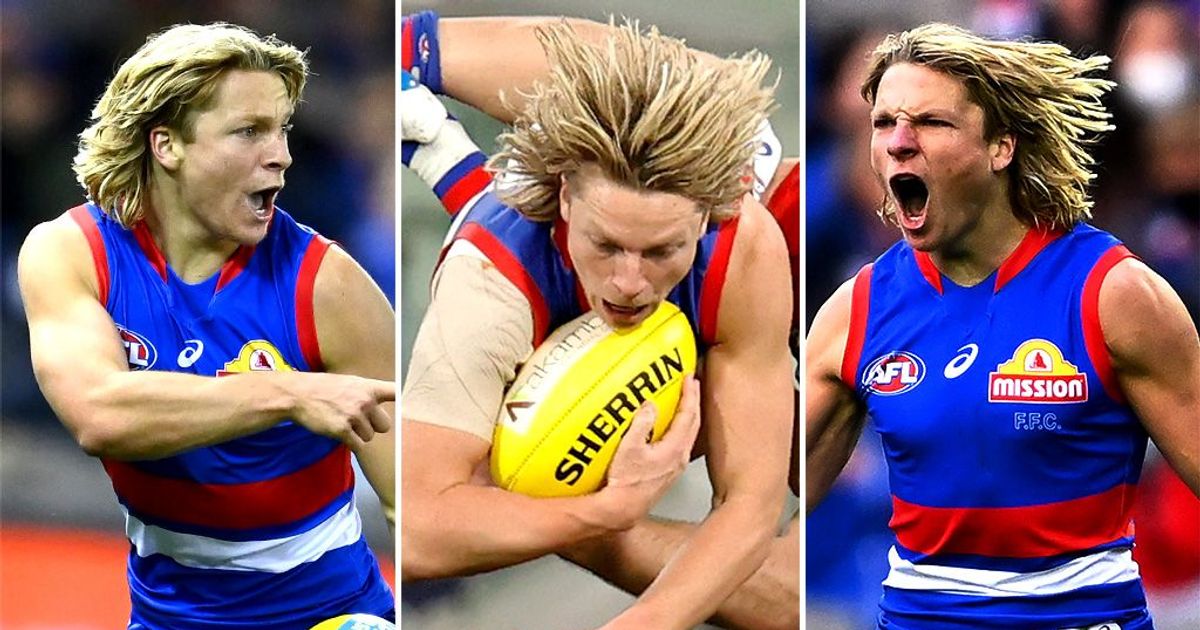 He provides pressure, has elite footy IQ, possesses high-level goal nous, swagger in abundance, and that must-have small forward quality of being able to creep his way under the skin of opposition defenders.

Except that he’s not actually a small forward. Rather, Weightman’s game is unique and, throughout season 2021, it has totally redefined the way the Western Bulldogs’ forward line has operated.

The Bulldogs, like Melbourne, had weighed up whether Weightman or Kysaiah Pickett was the man for them with pick No.15 in the 2019 NAB AFL Draft. Their decision was made for them, somewhat, when the Dees opted for ‘Kozzy’ earlier in the night.

But whereas Pickett is that natural, zippy, ground-level attacking player, Weightman is something else altogether. At 178cm, he is a small forward in every aspect – apart from the way he kicks his goals.

Weightman, still just 20 years of age, has kicked 25 goals from 14 games since returning to the Dogs’ team in round nine this year. His tally of four majors in last Sunday’s elimination final against Essendon was the most crucial haul of his young career to date.

And yet, according to Champion Data, 84 per cent of his goals this season have come from set shots. It’s clearly the highest rate of any small forward to kick 20 or more goals throughout the year.

That’s because Weightman, a talented junior prospect out of the Dandenong Stingrays, is not a stereotypical small forward. Unlike most other players in the League of his stature, he is someone his teammates want to be kicking the ball to in the air.

He is a target, and a very good one at that. He ranks ‘elite’ among general forwards for both marks inside-50 and contested marks – as well as for goals – making him incredibly important in a Bulldogs outfit lacking taller options in the absence of Josh Bruce.

After Bruce’s season ended abruptly due to an ACL injury sustained in round 21, Weightman’s place as a focal point in the Bulldogs’ forward line has grown significantly. His average of 4.8 forward-50 targets per match is the second most of any Dogs player available for this Saturday night’s semi-final against Brisbane.

Only key forward Aaron Naughton (8.8 targets per match) is ahead of Weightman, with even Tim English (3.8 per match) some way behind the youngster. It’s evidence of a superb aerial presence highlighted by his incredible leaping Mark of the Year contender over Melbourne skipper Max Gawn in round 19.

But that’s not to say Weightman doesn’t do the stuff that often defines the role of a small forward. He does that as well. He is simply good enough to do both, and do both at quite a high level.

Weightman has clearly emerged as the Western Bulldogs’ No.1 player for forward-half pressure points this year, according to Champion Data. That’s despite the fact he’s only played 14 of a possible 23 games.

What’s more is that he’s added the pressure element to a Dogs outfit that was lacking in that area throughout the first two months of the season. According to Champion Data, the side’s pressure factor has risen from 1.70 in the nine games without Weightman (ranked 12th in the League), to 1.75 in the 14 games with him (ranked sixth in the League).

While his four-goal performance against Essendon was celebrated, naturally, by his ability to hit the scoreboard and take the game away from the Bombers, it was his harassing, unselfish work without the footy that set the tone for his afternoon.

His smother on Essendon’s Dylan Shiel early in the match, having already pressured both Archie Perkins and Tom Cutler into linking handballs through his relentless chasing, was evidence of that.

There is, of course, another aspect to Weightman’s game that makes him such an entertaining, watchable player – provided you’re not a fan of the opposition on any particular match day – and that’s his ability to draw a free kick.

All four of Weightman’s goals on Sunday came from free kicks. According to Champion Data, 36 percent of his goals this year have done so. It’s the highest rate of any player to kick 20 or more goals in season 2021.

The 1.8 free kicks he wins per match are also the second-most of any forward in the competition this year, behind only Greater Western Sydney’s controversial superstar Toby Greene.

Earlier this year, Greene – a player in a similar mould to Weightman in terms of his stature and presence in the forward line – added a second Therabody AFL All-Australian blazer to his collection.

On this season’s evidence, Weightman – who, having played just 17 career games, is one of the rising stars of the competition – could be challenging Greene for that small forward position in the All-Australian team very soon.